Click On Any Book Cover to go straight to the Amazon website, which invites you to read a portion of the book using its “look-inside” feature. 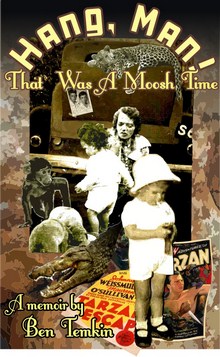 HANG, MAN! THAT WAS A MOOSH TIME is a non-fictional memoir of the relationship of the author and his elder brother Solomon (Sol) who, aged 40 years, died in a shooting in 1976 in Johannesburg.

As the author describes Sol’s death and its aftermath, he tells also the story of his own and Sol’s adventures and misadventures in childhood to mid-teens as the dysfunctional family disintegrates. The book is a vivid memoir of years in Rhodesia mainly between the 1940s and mid-1950s.

While the boys grow into their teens they revel in the mostly unsupervised freedom in veld and town. Their homes on the Salisbury Kopje are a haven in which other children can chat and play with an adult, Maxie, the boys’ mother, on equal terms,. Maxie’s home is also the centre of adult parties, the revellers a mix of skin colour and creeds. She, a Christian, is married to Jewish husband Jack, thirteen years older than her. The marriage doesn’t work mainly because of the age and religious difference as well as their increasing dependence on alcohol.

Jack’s business ventures regularly fail. The family are rescued from poverty by Jack’s sister, Pearl, a successful businesswoman in Johannesburg and also by Michie, Maxie’s close friend. Pearl takes the boys to a Jewish Boarding School for a year, a remarkable story in itself, before they are returned to their own, and often drunken, family battleground.

Through their mid-teens, the author recounts their school days, during which time Maxie’s health fails. Short of his fifteenth birthday, the author moves to live with Pearl and her husband Henry. The brothers’ link remains and the memoir recalls their later contacts until Sol’s death. The religious conflict reaches resolution with Sol’s funeral. The book tells about crocodiles, roaring lions, the leopard that lurked around the bedroom, a baboon in a car, juvenile crime and multiple Tarzans. It is a bold, fast-pacing, fascinating, humorous, poignant and honest story. 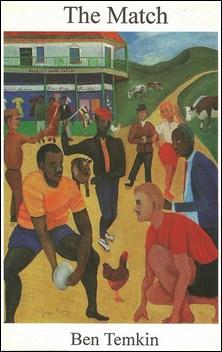 Written in 1995, less than a year after South Africa became a democracy, The Match takes the reader into the world of the new South Africa.

Nelson Mandela has retired and consensus government continues. Not everyone is happy, however. In Trekseinde, a small country town clinging desperately to apartheid, ageing schoolboy Pampoen Coetzer sets up a new terrorist movement with a scatological acronym designed to embarrass the media. Then comes the devastating government edict that school sport has to be integrated. The Trekseinde whites, reinforced by the virulent editorials of local editor, Kobus Smuts, resist at first but finally see the proposed rugby match between the local black and white schools as an opportunity to confirm white superiority. The blacks, with little or no rugby-playing skills, fear a disaster but wily Smallboy Thula plans an ingenious scheme to build an invincible team.

As Smallboy travels around South Africa to put his plan into action, Pampoen goes into the media business with his own broadcasting station, Radio Liberty. With the help of Kobus Smuts, Radio Liberty brings world attention to the strife in Trekseinde. The one-legged Kobus Smuts becomes an international cause célèbre, and the British Government fights to stave off international sanctions. The Match is a satirical tale of venality and opportunism, but it is also a story that confirms the ability of people to break down barriers and build hope.

The cover illustration is by Jean Marie Temkin whose work has been exhibited in the Netherlands, Zimbabwe and South Africa. 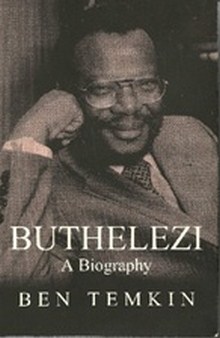 For some four decades Mangosuthu Buthelezi has played a leading role in South African politics and is widely credited for his part in maintaining political activism against apartheid in the 1970s when draconian legislation had either sent the country’s opposition into exile or confinement in prison or under house arrest.

Exploiting his dual role as Premier of KwaZulu and traditional premier of the Zulu nation, he challenged the white government to carry out its promise to provide equal treatment to all its peoples. The government’s response was little more than a sequence of cosmetic changes to the political structure that entrenched its power, chief among them being the creation of so-called independent Bantustans with little or no hope of financial viability.

In the absence of black internal opposition, Buthelezi recreated Inkatha, ostensibly as a cultural movement but in reality as a broad-based political movement. As the movement grew, the African National Congress at first threw its support behind it. This support was, however, withdrawn and turned mainly to open hostility because Buthelezi refused to adopt violence as an oppositional tactic.

This biography, sourced largely from extensive interviews with Buthelezi, as well as access to his documents, tells how this enmity grew into a violent confrontation in which thousands of lives were lost and which threatened to tear South Africa apart, even on the eve of its first democratic elections in 1994. It tells how Buthelezi, seeking imprimatur from his Church for a ‘just war’ against apartheid, was ignored and found himself in conflict with his Archbishop. It tells of his desertion by close friends of many years and of his continued vilification despite his proven commitment in government where he serves as a senior cabinet minister.

It is also the story of a man’s faith and belief in spiritual values, a man committed to his clan, his nation and his country.