Closing at $1/R9,3 it is against the US dollar that initially the rand appears to be most vulnerable. This is because petrol is the first price rise felt by most people. It’s only later that the shopper draws a sharp breath at price rises in the supermarket, where the cost of goods, is affected by the oil price.

The advantage of a weak rand to European exports, does not always apply to US exports. For example, the kinds of fresh food products we sell to England and Germany, are unwanted in the US. SA exporters who love a weak rand are metal and mineral producers but, as many resources prices have fallen, even they are not smiling.

As the gold price slid by almost 12% from October until the start of this month, gold’s appeal waned as the dollar strengthened against major currencies. The good news is that the dollar gold price has just given a new buy signal. However, as the cause is attributable to Cypriot bank problems, I am not betting on a sustained recovery. Better to watch the rand gold price that slipped 10% from October to March as it has now grabbed back 6% of the loss resulting in a new buy signal. Again, it is time to look at Newgold and Krugerrands.

Not that I have ever invested in hedge funds, or is ever likely to, many hedge funds came a cropper following the 2008 crash. Yet hedging against currency risks, as many hedge funds do, makes perfect sense. Many of our large companies, including gold producers practise hedging, but you don’t have to be a corporation or be rich to guard your money against currency and inflation risks. You do this by wisely investing in the share market. Some deem the share market to be risky, but doing nothing to protect your assets against the ravages of its spending-power erosion, ceases to be a risk and become a certainty. In these money-pinching times, those who are hurting less than the rest are those who invest in shares or share-linked securities.

Regular readers of my columns won’t be surprised that I am repeating my punt for Sasol as a way to ease the motorists burden. The price of Sasol reached a five-year high on March 15 and currently has an acceptable 3,63% dividend yield.

My suggestion for easing the supermarket shopper s burden is buying shares in food producers, many of whom export some produce to Europe. The JSE Food producers and processors index has risen 156% since its darkest 2008 days, and 19% in the past year.

Not that anyone I know feels at all good at the supermarket checkout, there is a little bit of a feel-good factor when entering an outlet of one whose shares you own because there is a chance that some of the rands you’ll spend will reflect on the share price and dividend. The JSE Food and Drug Retailers index is moving swiftly up from an oversold position and has given a new buy signal. Dividend yields are currently 3,19% for Spar (which is currently the healthiest looking) 2,45% for Pick ‘n Pay and 1,51% for Shoprite.

Animal food producers are particularly important as a large component of the soaring meat prices is animal feeds, which if locally produced, must surely result in a cost saving. Until two weeks ago surrounded by mealie fields, and then seeing the whole crop, leaves and all chopped up to feed dairy cows, I’ve been taught me something about growing crops of animal feed.

As it is America and China that appear to pulling up bootstraps better than the rest, I’m waiting for a revival in resources. However, apart from it being oversold and dipping through the bottom of a standard error channel, there is no sign of this yet.

When I first gave my dire predictions for the rand, they were pooh-poohed by some but the chart clearly shows how badly the rand was rubbished on two occasions since the start of the new millennium.

As well as three major currencies, I have included a green zig-zag line, which alters direction each time the rand’s value changed by 10% against the pound. You will notice that on the first two occasions, the zig-zags formed two peaks and may well do so again.

The chart shows that at the start of the 2000s, the rand was already losing substantially when in 2002 it plummeted to the record lows. There is little doubt the politics of the time exacerbated the fall. The rand, along with values of commodities, share and property prices plummeted in 2008 when the world was rocked by the US property bust. The primary cause was the manipulation of mortgage instruments. Not our fault, but, as we are dubbed an emerging economy, our currency is regarded as risky.

What is the cause this time? Fragile world economics play a role, but our wobbly government can be blamed for our several downgrades and has pushed us high on the list of countries with a murky outlook. 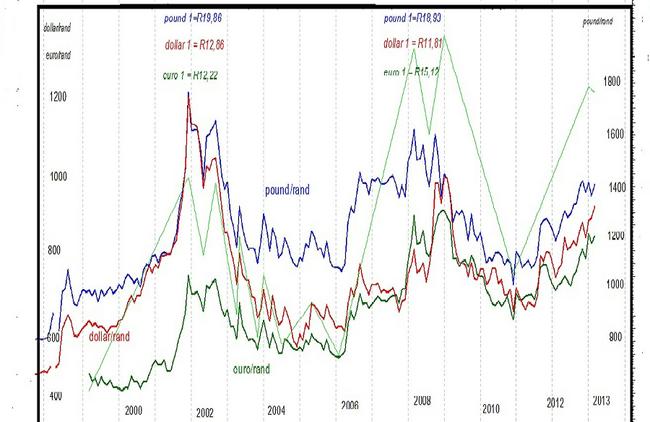