Bumping into Mike in Pick ‘n Pay, he asked my opinion of Capitec. Bank. My immediate reply was ‘super’. I am not considering an investment in the banking sector at present, but, if I was, Capitec, with its no no-frill methods of banking, would head the list.

We’ve heard the mutterings about the dangers of unsecured lending, and are aware that some of the present outstanding loans may never be repaid, but that is not new. We know that non-repayment of debt may apply to the ultimate losers in labour disputes, but redundancies and retrenchments have been with us for ages and apply to all lenders. In my opinion it’s just that Capitec deals with the lower end of the market that makes people overly suspicious.

Promising I’d take another look at Capitec after I’d unpacked my shopping, I received a surprise from the chart which shows a near 17% price gain in the past 29 days shooting it from an oversold onto an overbought position. This has pushed its dividend yield down to 2,25% and its P/E ratio up to 14,14. This compares with a dividend yield of 3,83% and a P/E 12,48 for the JSE Banking index. However, relative to the sector, Capitec’s P/E tends to be on the high side, and its dividend yield is hardly ever tempting enough for income seekers.

So what should Mike do? In his shoes, given the highly volatile nature of the share, I’d bide my time until the price moves out of an overbought position and draws closer to its equilibrium, which is currently at R190,23.

Of course, I could be completely wrong, and the latest price surge may be the start of the share’s climb back towards the high of R232 reached almost a year ago. As Capitec badly lagged the sector for five months before this latest surge, a complete trend change is a possibility. Certainly, the super build-up of white candles on the far right of the chart, which takes the plotting well above the upper level of the standard deviation channel, makes this scenario seem even more possible. 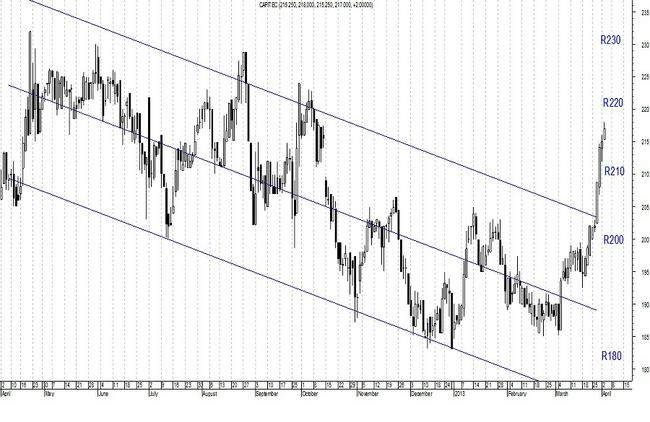