At one time, Ben and I were heavily invested in financials via Liberty Holdings. One reason for buying was that Ben had once worked with Donny Gordon and had come to respect the man. Later Donny patted my ego by flirting with me in the nicest way possible, a sure way to win a woman’s favour.

We have always believed that knowing the person in charge is a major plus when coming to an investment decision. As financial journalists, we regularly had the opportunity to meet and question the person running the company. Getting to know Raymond Ackerman saw us investing in Pick ‘n Pay, and impressed with Bill Lynch, we bought Imperial. However, in the case of Liberty Holdings, we were less keen on the now Sir Donny’s successors, and have long moved out of the share.

Not at all keen on banks, our portfolio remained light on financials until we bought Momentum for its attractive yield for our High Income portfolio. The share, we felt was undervalued relative to its embedded value and other investment fundamentals. This was before the merger with Metropolitan and Momentum Group that made MMI South Africa’s third largest life insurance group.

We are delighted with MMI. We bought the shares just over three years ago and its annual compound internal rate of return (cash-out to cash-in) has been over 25%. As the share has just given a new buy signal and as its dividend yield is at an attractive 4,4% (earning yield 7,84%) we’re looking an opportunity to add some more.

MMI’s new buy signal is shown on the chart with the upward break of its moving average convergence/divergence (MACD) indicator (the red line), through the green signal line. Another positive indicator is that the cross-over took place below the thin horizontal zero line of the MACD. Adding even more appeal is the string of rising white candles on the far right of the chart. The white string has now been halted by a few blacks as MMI followed the rest of the market.

I have added a blue standard error band, which began exactly a year ago. You can see that in the middle of April the candlestick plotting broke downwards through the lower edge of the band putting it into a well-oversold position. It briefly entered the channel, only to flip back into an oversold position. With the share lots of catching up to do, I am expecting that within a week or two, it will have moved up to the centre equilibrium line. 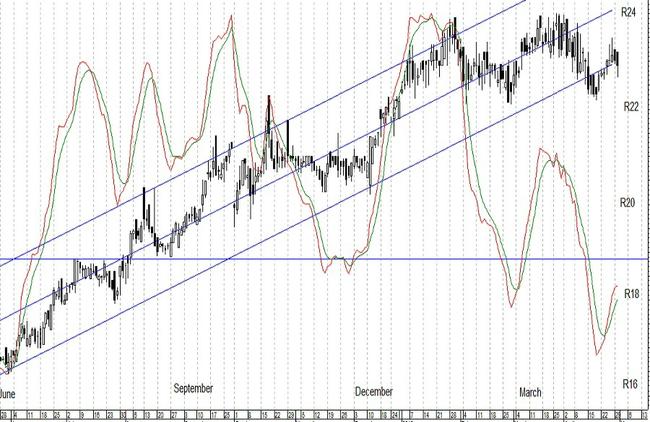