When I first told you about made my ghastly counts to 10,78, 13,92 and 17,68 respectively to the dollar, euro and pound, hoped that I would be proved wrong. Not that I like to be proved wrong but the prospect of happenings in our economy if the rand really did slump to such levels, were too ghastly to contemplate. My bit of good news is that we are not at these levels - yet. The bad news is that, as I allow my counts a 3% margin of error, the rand is a mere 33c from the bottom of the $/R error band, 57c away for the euro band and a mere whisker away from the pound band.

We have been in these kinds of situations before, but the last time, 2008, was unusual as the entire world market was in utter chaos. Other occasions have sometimes been because the rest of the world was critical of South Africa and therefore its currency. This time the market has every right to be critical.

For three years after the 2008 banking-dilemma, which did not include our banks, we were smugly smiling. While the economies of our trading partners were troubled, our only problem was their inability to buy our goods. Not only did they need less but, with the rand strengthening against their currencies, we were uncompetitive. These goods included our metals and minerals. Our trading partners still need South African mined goods, which because of the drastic fall in the rand must appear cheap. But, as those who pull the stuff out of the ground spend a good deal of their time downing tools, how much they can produce for export is questionable.

To add salt to the wounds, the gold price is at the two-and-a-half year low and at last dropped to below the platinum price, which is where you’d expect it to be. But, as in rand terms it is heading back towards its last year’s record high, as a rand hedge it is it is working in our favour.

I’ve been quizzed a couple of times on the gold-linked recommendations that I’ve made over the past goodness knows how long.

I’ve not changed my mind. Gold is still a good investment for South Africans, especially in times when the rand is in the process of being rubbished. The only legal gold investments we can make are in gold coins, typically Krugerrands, gold shares and Newgold ETF. Gold shares were never a recommendation even before the mining problems but physical gold in the form of coins and the EFT, remain near the top of my list. A glance at the chart tells you why. 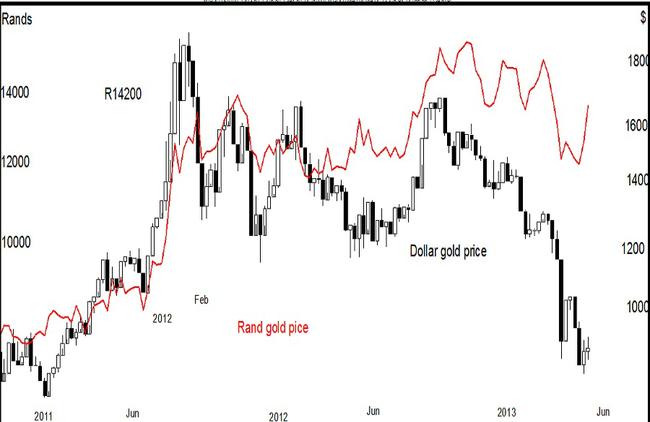