Collectively against major currencies, the rand is in a far worse state than it was in the 2002 fallout, and the 2008 meltdown. I have reached this conclusion by comparing it to the dollar, pound and euro, but it could be even worse against some other currencies.

The chart plots the rand’s exchange rate against two major currencies over a 17-year period with the euro making a third when it came into being. Europe is historically our major trading partner, with our agricultural produce high on the list of our exports but also featuring high on our list of finished goods that are imported. So as not to confuse chart readings, I have left out the linear regression slopes to trace the extent of the rand’s losses. Alarming is the significant 2,9 in the Euro, compared with the 1,3 slope against the pound and 0,58 against the US dollar.

In 2002, the rand fell to ₤1/R19,86, which is 14% lower than its current value. In 2008 it fell to ₤1/R18.9 or 11% lower that today. The slight strengthening over the past day or two, taking the point-and-figure plotting downwards from the most recent support level of ₤1/R17, is a relief. But this support has been twice tested and a third fall taking it below that support, would give us a forward count to around ₤1/R21.

Since the 2002 meltdown, the exchange rate against the then fledgling currency, the Euro, was €1/R12.22 since which the rand has lost 30%. In 2008, when share markets crashed, regarded as a high-risk currency, the rand fell to €1/R15,2, which is only 7% lower than the current rate. Here the point-and-figure chart shows the rand breaking through a spread triple-top and so we already have a forward count to €1/R17.

Our major blow in relation to the dollar/rand exchange rate is that while the oil we import is not produced in the US, the oil is priced in US dollars. Therefore, local exporters may read my projections with glee as, if they realize, their order books will fatten further by selling at highly competitive prices. By contrast importers will cry like babies. The most wildly damaging import is oil which is now 24% lower that its price of $146 a barrel in July 2008, but then the exchange rate was much less scary at $1/R7,73. 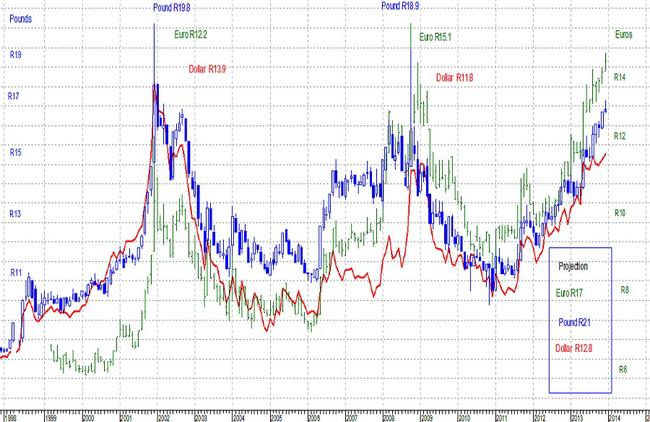 High Yield Portfolio is on target →