Back in 2012, they possibly laughed at me when I projected that the rand would fall to R10,768 against the dollar, R13.92 against the Euro and R17,68 against the pound. In the last few days, the rand has hit R10,82 against the dollar, after pausing at R10,78; R14,76 against the Euro after pausing for a while in November at R13,72, and R17,66 against the pound. By ‘They’ I may be talking about Business Day which, a year before, had dropped my column and Moneyweb which had previously published some of my projections but wanted no more. However, the warnings did appear on the Temkinbooks website (still vibrant) and RASKI (Retired And Spending the Kid’s Inheritance). (RASKI’s website is, unfortunately, deceased).

It was also about that time that a highly qualified ‘Financial Adviser’ about whom I was writing a profile for Women in Business, raised her hands in horror when I said that Ben and my investments were in the share market rather than in one of the insurances she marketed. “Such a risk”, she shrieked, “what about the 2008 crash”. I admitted that market crashes were a pitfall, but only if you sold your shares before the market had had time to recover. In the case of the JSE, that took less than 1 000 working days or a bit over two years, and then only if you had invested in the less-solid end of the market. Even if you had, you’d still have collected your dividend income.

The portfolios of those of us who did not sell in panic are now enjoying 43% gain above their May 2008 high. Better still, rather than watching the rand’s devaluation eating 37% of the value of insurance or similar investment products, we share investors have not only beaten the devaluation but also gained an extra 6%, and some handy dividend income.

As a chartist, I’m bound to prefer visuals to figures, and I am sure that the few readers I have left agree with me, hence today’s comparison chart that I’ve plotted monthly.

The red bar plotting shows how many rands you need to buy one dollar, hence its steep rise from $1/R6,4 in July 2011 to $1/10,8 on 14 January. I have overlaid this plotting with a standard error channel showing by breaks through the upper edge that, on two occasions, late 2012 and mid-2013, the rand’s losses were so great that time-wise they were unsustainable. The centre-line of the channel is the equilibrium, the level to which the plotting returns. Currently the plotting is slightly above the equilibrium making me expect a slight correction. Should this trend continue, my next count (my projection calculated using point-and-figure charting) is that the rand will probably fall to $1/R12,90 before a major correction takes place.

The black candle plotting is the JSE Overall index, which I used for my earlier calculations. It too is moving steeply upwards along with world markets, but at a more rapid rate perhaps because of the rand’s loss. The vertical line in the center of the chart shows that the JSE Overall had reached its pre-crash level in early 2012, but the Dow Jones industrial index reached its pre-crash level only in March 2013. From the 2009 market bottom, the JSE Overall has gained 141,06% while the Dow has put on 143,72%.

The projections are probabilities not predictions. Our equities in the stock market have been doing pretty well - on probabilities. 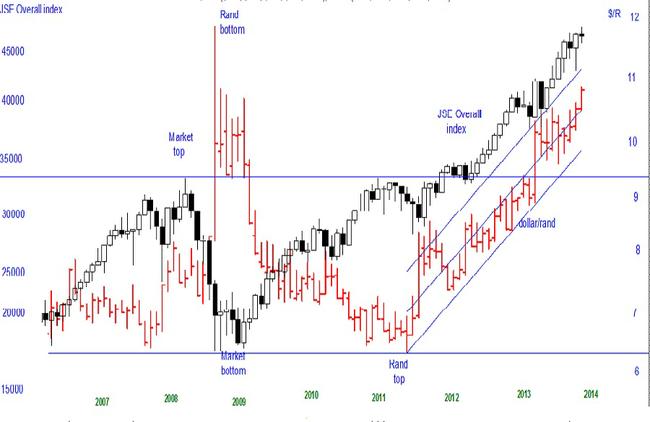 ← High Yield Portfolio is on target