Irrespective of whether you own a vehicle or not, you are hurting. The vehicle-less watch in horror as food prices rocket, while we drivers suffer the double whammy.

Makes you think, doesn’t it?

During this period, fuel tax has increased 27% and levies, margins etc, by 36,6%. This means that the taxman has been raking it in from the direct tax, which I have shown in red well as from bits and bobs like customs and excise, wholesale and retail margins and the rest that I have shown in green. On top of these figures is the incremental Inland Transport Recovery Cost.

However, rather than blaming the Revenue Department for your discomfort, the real Bogy Man is our government. Their mishandling of just about everything has turned our currency into Monopoly money. They can’t be blamed for the 14.9% rise in the oil, but can be blamed for almost everything else.

There’s no arguing that at the start of 2011, the rand had become overvalued because the South Africa rand had become a currency of choice. Interest rates available elsewhere were pathetic, while ours were ahead of inflation. They are still higher than most, but favourable looks turned jaundiced on news of our chief Honcho spending fortunes on his private residence. Overtaken by greed, large sections of our workforce strike for mega-buck wage packages, and our power utility blames wet coal for shutting off the machines of industry.

The thinking amongst us are aware of the simple answer to our problem, but unfortunately we are in the minority. 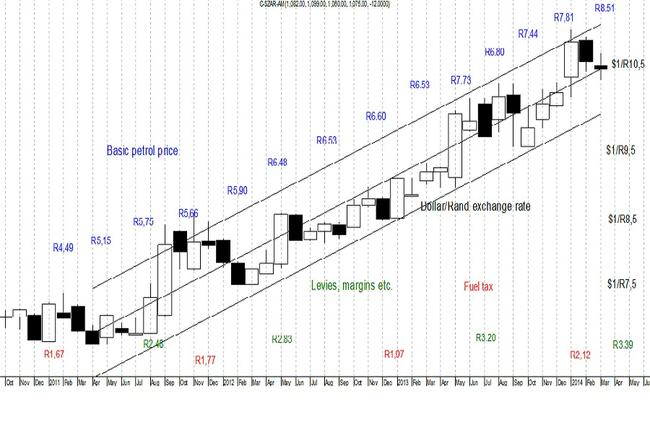 A glimmer of hope for the rand →

← The Seesaw Tilts Too Far